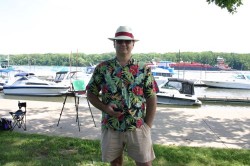 Mark Vincent LaPolla has been a newspaper delivery boy, software engineer, entrepreneur, research scientist, innkeeper, chef and now novelist. Not that he’s given up being an innkeeper and chef. He still does that.

Mark comes from a restaurant and hotel family. His father and mother opened the Chanteclaire on Long Island. Later his mother had a bed and breakfast in Danville, Virginia. His family is chock full of famous chefs, musicians, musicologists, linguists, computer scientists and home brewers. At an earlier age, Mark realized the restaurant and hotel life was not for him unless he was on the receiving and sleeping end of it. So, after spending his formative years as a Newsday newspaper boy, he studied Computer Science, Philosophy, English Lit and Linguistics at both the undergraduate and graduate levels. After graduating, Mark went into high tech. And that worked out fine because he became a software engineer and entrepreneur.

It worked out, that is, until, one day, his wife, Kim, woke up, turned to him and said, “We’re going to have an inn with an art workshop program and you’re the chef.” And the rest is history. Mark and Kim opened the Greenville Arms 1889 Inn and the Hudson River Valley Art Workshops and Fiber Art Workshops. After Mark created Life By Chocolate, he cast around for something else to do and that is when the writing bug struck, having lain dormant and subjugated by the rush of writing code and cashing his paychecks.

Since then, Mark has spent his time writing novels when he isn’t cooking or helping Kim run their inn and art schools. Mark has planned out 8 books in the Omniverse fantasy adventure series and 2 in the art quilt cosy mystery series, The Quilting Sleuth. He is also writing a stand alone novel called The Timely Murder of María del Pilar. And this is just the beginning. 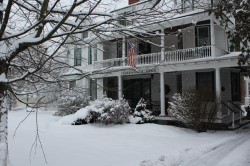